Some 32 of Graham's friends and relations attended his funeral on 15 July at South London Crematorium, Streatham. An obituary by Richard Adams can be see on the Arnold Bax website. We are currently working toward probate but it will take a long time to clear his flat of books, CDs, DVDs, framed pictures, antique furniture and archaeological objects. To our great relief, and at the suggestion of Richard Adams and Christopher Webber, John Pickard, composer and Professor of Composition and Applied Musicology at Bristol University, will be acquiring Graham's bound copies of Bax scores, some 70 in all, on behalf of the university.

Brief biography Graham was born in London on 19 February 1946 and died, also in London, on 30 May 2021. His primary schooling was at St Mary's CofE in Balham and his secondary at Battersea Grammar School, Streatham. He lived in our parents' rented accommodation at 107 Louisville Road, London SW17, until the house was sold some 10 years after the death of our mother in 1987. He then purchased the first floor flat at 87 Gleneldon Road, Streatham SW16. At school he specialised in classics and music, having been was taught piano by Roger Duce from his early teens. He read classics as a day student at London University and was awarded his Bachelor of Arts degree in 1972 (I think). He worked as a librarian in Charing Cross Road Library, but later secured a post as assistant librarian at the Victoria & Albert Museum. Subsequently he became a curator in the V&A's Indian Department, remaining so until his retirement in 2006.

At an early age Graham acquired from me a then perverse taste for the music of Sir Arnold Bax, who had but recently died, and found himself so enthralled by it that he started preliminary work on as comprehensive a catalogue of Bax's music as possible. With the advice and encouragement of Professor Arnold Whittall of King's College, London, he expanded his ongoing catalogue into a full-scale study of Bax's life and music, under the supervision of composer Bernard Stevens, for which he was awarded a PhD in 1994.

Graham enjoyed swimming, walking, and visiting other countries and cultures, especially India. He was a great indoor games player and one of my most valuable guinea-pigs in the testing and development of new games. He particularly enjoyed card games and was fiendishly good at Skat.

We thought it a shame that he never married, as he would have made as good a dad as he was an uncle to his niece and nephews.

Announcement of 30 May My brother Graham died between 1 and 2 pm today at St Georges's Hospital Tooting. My wife Barbara and I made our farewells to him about 12 noon, when he was given pain-relieving medication prior to the removal of his respiration apparatus, a procedure to which he was able to signal assent. 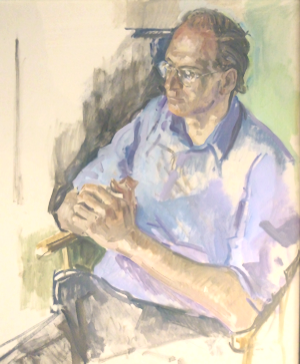 Portrait by Michael Croker with motor neurone disease (MND) in January 2021. Until the middle of May he was being attended twice a week by a physiotherapist and a speech therapist, and there was talk of getting carers in to see to him two or three times a day. On Friday 14 May, however, his therapists persuaded him (not without difficulty) that he should go into hospital to be cared for more thoroughly, particularly because he was finding it hard to chew and swallow and was suffering from malnutrition.

When our brother Andrew and I visited Graham on Tuesday 26 May he was quite alert, sitting up and talking coherently, though he was obviously having difficulty breathing and had to pause for breath after every few words. When not speaking he was spending most of the time being assisted with respiration by means of a BiPAP

At that time he had gained significant strength and the palliative care team were discussing with us the possibility of his returning home and having carers attending to him four times a day. On Wednesday they rang and asked me to bring in his outdoor shoes to enable him to practise walking.

Graham with Lucy Barnard, 2004 Thursday when I brought his shoes in he'd had a relapse, and the talk then was of transferring him to a hospice as soon as he was stable enough to make the transition. I visited him on Saturday 29 May but he was asleep and unable to communicate. Andrew and his wife Fiona came in soon after I left and were able to communicate, albeit on a very limited basis. They did establish that he wasn’t in pain, but his breathing was laboured and he was irritated by a cough which required additional medication.

When we know about funeral arrangements I will post them on this web page. Meanwhile, many thanks to all who have been asking after him for the past few weeks. I will respond to the emails he has received as soon as possible and hope to set up a memorial page in due course.